On Novelty: A Follow-Up on Day Dreaming

Our team chatted about the last article we posted as a blog re: finding novelty through travel at any age or stage in life. We had different reactions to the article - mine being the most negative.   In any event, our discussion led us to think of our current gappers: some can travel, while other decide not to - reasons for each are quite varied.

So, what about you?  Can you pick up for a break tomorrow? Or a planned on next year?   Regardless, the day dreaming these questions lead us to could be benefit enough. 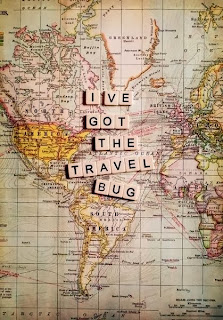 The article suggests that in order to explore novelity you must leave your present geographic space.   This, of course, is not an option for all of us.  Regardless of having or not having the 'travel bug' leaving or abandoning our current world with it's responsibilities etc is not always an option.

Well, for the next 5 weeks let's explore ways to travel without luggage, a boarding pass or a pass port.

This week it is Day Dreaming.  In a 2012 research project, the benefits of day dreaming were captured.  Daydreaming can increase your focus and task management.  At the same time, give you the boost you need to continue on a task or throughout the day.

The same way taking in new smells, sights and sounds in another country might increase your "aha" moments, day dreaming can help satisfy these same needs.

6 Quotes From Famous Dreamers That Prove Imagination Is Crucial

Close to 50 percent of our waking hours are spent daydreaming -- so why not make those visions worth your while? Not only does a wandering mind provide a quick mental escape, it actually produces numerous brain benefits. Studies have found that daydreaming can be linked to better test scores and a more engaged mind, which may help with recalling information when surrounded by distractions.
Putting our head in the clouds is also crucial to the creative process. In fact, many great ideas -- from Salvador Dali's great works of art to songs by the Beatles -- came from letting dreams and imaginations run wild. Check out the imagination quotes below from these famous dreamers and thinkers. Then, the next time your mind starts to drift, let it.

And a video that helps to inspire novelity from the PianoGuys.   It is seasonal & interesting.  Have you stopped to think about how to use things differently?

Down With Gap Years? Inspiration for gapping at any stage or age! 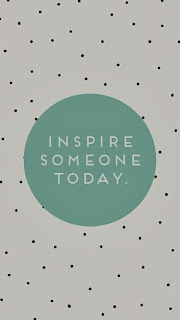 Today, I felt inspired by David Dodd, a creative entrepreneur and life hacker.   He wrote a piece for The Huffington Post (UK) this past week sharing insight into his recent career break.  While I was surprised by his use of the word 'novelty' to express his career break and gap years, I was inspired by his message.

At mygapyear, we encourage folks to take a gap year at any stage or age of their lives.  It is about taking a break from your regular routine to try something different.  Suggesting or focusing on the novelty (the quality of being new, original, or unusual) of the experience, negates the profound learning and growth one gains through a gap year.

Secondly, he suggests that gap years taken by folks at a more 'traditional' age involves "a youthful year of galavanting" similarly dismisses that gap years for any individual can be a time of renewal and growth.

At mygapyear, we focus in on finding out what our gappers want to accomplish, learn, develop or explore during their gap year.   This is what makes our program and approach on gap years distinct and attractive to gappers and their families.   It is a 12 month detailed plan created through discovery, coaching and experience advising.

While Dodd's message is inspiring, there are ways to explore new ways of seeing your day-to-day without chasing novelty.


Let's explore this in the weeks to come.

Down With Gap Years, Long Live the Career Break

If we could only enjoy one significant life-pause in which to see the world a little more (and perhaps a little differently), it should be as part of a mid-career break, rather than a youthful gap year of galavanting. Having just returned from seven months travelling (as part of a year long life experiment) I believe the benefits of taking time out mid-career are huge; so why are we so reticent to embrace career breaks with the same lustre as gap years?
Gap years used to be seen as the last big chance for an adventure before working life, and we did it (if we could) because everyone knew we couldn't very well stop mid-career for a break. But if such societal blinkers were removed, doesn't a career break make more sense than a gap year? The gap year is, of course, a great chance to open young eyes and enjoy new perspectives, but university and early working life are such an incredible adventure in and of themselves that a trip to Thailand isn't necessary for a dose of novelty. There's just so much else going on during those furtive years, and a nip of newness is far more necessary further down the line. In the same way that attending University became an accepted elongation to the average educational career, so the career break should, in time, become a recognised part of our working lives. There hasn't always been the need for such an intervention, but as working careers and periods of retirement lengthen, it's about time more employers accepted that, every now and then, a change would do us all good.
I have just returned to the UK after seven months traveling down through North, Central and South America. At the age of 33, it was my first long backpacking stint, and this sets me apart from my peers, most of whom hoofed round the world during gap years at 18 or 21. For me, a sustained period of travel in my thirties was an incredible tonic; only days after returning I can already say that it ranks as a peak experience in my life, and has helped me see the world (and my place in it) in a more positive way. It wasn't easy to take a break from my career - far from it - but by doing so, I've recharged my batteries, created a new appetite for work and life, and developed the kind of objectivity that can only be gained from time away. Most importantly, thanks to a constant stream of new sights, cultures and people, I've been reminded how potent a force novelty can be. A good dose of novelty turns our lives upside down in a positive way, it questions our world view and forces the brain to explore new avenues. There's plenty of evidence to support this view: it was claimed by scientists recently, for example, that regular doses of novelty can enable the brain to rebuild itself, and can even stave off debilitating illnesses such as Alzheimer's. With mounting evidence of this kind, why isn't everyone considering a regular dose of novelty to break up their working routine? Instead, as workers, we do what we've done since the Industrial Revolution: we become entrenched in a career, we cling onto our position and climb the greasy pole, taking as few risks as possible, learning from those ahead of us and allowing the powerful disruptive influence of novelty to fall by the wayside.
In light of the benefits I have enjoyed during my own career break, I have a new battle cry: if - like many career-focused individuals - your ration of novelty has dwindled to naught, it's time for a different way of thinking, it's time to question whether the risks of being dislodged are outweighed by the benefits a sustained period of novelty might bring, and it's time to balance career stability against mental and physical wellbeing. Corporate HR practices may be becoming more humanist, but neither employers nor the state will ever push the career break agenda too hard. Our capitalist society requires unwavering worker bees with an unstinting desire for financial betterment, and career breaks don't easily fit into that picture.
The bottom line is this: if more people want to enjoy the benefits of career breaks, they're going to have to take the initiative themselves. Workers unite, let's take some time off and rediscover novelty!
at 01:00 No comments:

'Cuz it's Friday and I'm in love

Hi Readers,
It's Friday. Maybe some of you are thinking about your 2-day weekend.   Here is an interesting way to visually think about how you are creating your weekend?
Whether you are currently gapping and have weekends to seek out fun or you are a student looking to make the most of your weekends, include some of these tips in planning your time and creating a great 60 hour weekend.
M﻿ 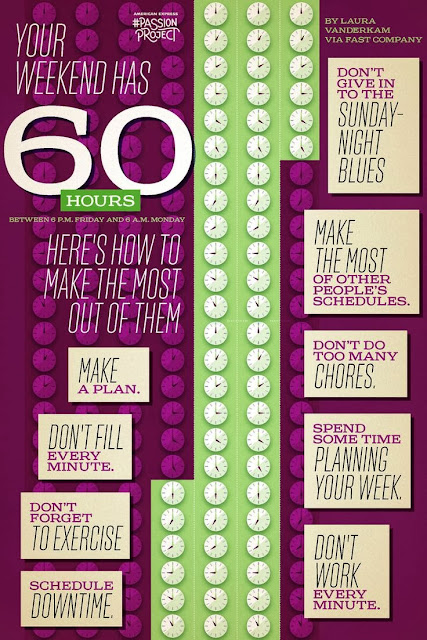