Today's blog is part of the fourth and final blogs that relate back to the Book of Awesome.  The power of questions and questioning bring us to unique spaces, both in body and mind that help us to align our vision with our goals.  Ultimately, we see results through this process.    Let's explore some questions, both from tow insightful woman Martha Beck and Marilee Adams.

20 Questions That Could Change Your Life

Finding the answers starts with posing the right questions—and Martha Beck has 20 to get you started.

1. What questions should I be asking myself?
At first I thought asking yourself what you should be asking yourself was redundant. It isn't. Without this question, you wouldn't ask any others, so it gets top billing. It creates an alert, thoughtful mind state, ideal for ferreting out the information you most need in every situation. Ask it frequently.

2. Is this what I want to be doing?
This very moment is, always, the only moment in which you can make changes. Knowing which changes are best for you comes, always, from assessing what you feel. Ask yourself many times every day if you like what you're doing. If the answer is no, start noticing what you'd prefer. Thus begins the revolution.

3. Why worry?
These two words, considered sincerely, can radically reconfigure the landscape of your mind. Worry rarely leads to positive action; it's just painful, useless fear about hypothetical events, which scuttles happiness rather than ensuring it. Some psychologists say that by focusing on gratitude, we can shut down the part of the brain that worries. It actually works!

4. Why do I like {cupcakes} more than I like {people}?
Feel free to switch out the words in brackets: You may like TV more than exercise, or bad boys more than nice guys, or burglary more than reading. Whatever the particulars, every woman has something she likes more than the somethings she's supposed to like. But forcing "virtues"—trying to like people more than cupcakes—drives us to vices that offer false freedom from oppression. Stop trying to like the things you don't like, and many vices will disappear on their own.

5. How do I want the world to be different because I lived in it?
Your existence is already a factor in world history—now, what sort of factor do you want it to be? Maybe you know you're here to create worldwide prosperity, a beautiful family, or one really excellent bagel. If your impressions are more vague, keep asking this question. Eventually you'll glimpse clearer outlines of your destiny. Live by design, not by accident.

7. Are {vegans} better people?
Again, it doesn't have to be vegans; the brackets are for you to fill in. Substitute the virtue squad that makes you feel worst about yourself, the one you'll never have the discipline to join, whether it's ultra-marathoners or mothers who never raise their voices. Whatever group you're asking about, the answer to this question is no.

8. What is my body telling me?
As I often say, my mind is a two-bit whore—by which I mean that my self-justifying brain, like any self-justifying brain, will happily absorb beliefs based on biases, ego gratification, magical thinking, or just plain error. The body knows better. It's a wise, capable creature. It recoils from what's bad for us, and leans into what's good. Let it.

9. How much junk could a chic chick chuck if a chic chick could chuck junk?
I believe this question was originally posed by Lao Tzu, who also wrote, "To become learned, each day add something. To become enlightened, each day drop something." Face it: You'd be better off without some of your relationships, many of your possessions, and most of your thoughts. Chuck your chic-chick junk, chic chick. Enlightenment awaits.

10. What's so funny?
Adults tend to put this question to children in a homicidal-sounding snarl, which is probably why as you grew up, your laughter rate dropped from 400 times a day (for toddlers) to the grown-up daily average of 15. Regain your youth by laughing at every possible situation. Then, please, tell us what's funny—about everyday life, about human nature, even about pain and fear. We'll pay you anything.

Also, if you prefer to listen and learn an interview from Marilee Adams.

This week we are looking at authenticity.   One way to make sense of authenticity, emotional intelligence is a great tool to use to make sense of our strengths, values and what makes us unique. Unlike IQ, EQ can be learned throughout your and can contribute to an opportunity to explore your most authentic self.

According to Goleman, there are five main themes related to EQ.  They are:
1. Self-Awareness
2. Managing Emotions
3. Empathy
4. Social Skills


Why is emotional intelligence so important?  Why do we use it in our work?  Below is a video series by Daniel Goleman that speaks specifically to the importance of developing IQ in our youth.  He also writes for those in the work force and age groups.  http://danielgoleman.info/


We would like to invite young men and their families to a forum on October 27th, 2012.  We hope to see you at the forum: Young Men - Finding Direction in the Millennium.   Throughout the day we will come together to explore what it means to be a young man growing up in the 21st century.   Part of that is learning about what make us unique and what we want to share with the world, what we would like to do at school, in the workforce, as members of a community and a family.   We are really inspired by the opportunity for growth and learning that will be presented at the forum.  If you are interested in joining us, please visit the website or email us to inquiry further about the day.  We certainly hope you will join us for a day of discovering your most authentic self.

Happy Friday!  Following up to last week's blog we are on a theme about awareness.  While Neil is referring to awareness as seeing the world differently.  This week's blog explores how gap years can help inspire a period of awareness for young adults; additionally, the growing awareness and understanding of the purpose of a gap year by universities.  Below is an article that was published in the Vancouver Observer this past week.

To gap, or not to gap? That is the question.

While the gap year, or “year out”, has been a common and popular rite of passage in Australia, New Zealand, the UK and many countries in Europe for decades,North American students have  traditionally ridden the academic conveyor belt all the way from preschool to university without a break.

Now, the tides are changing and many soon- to-be high school graduates are saying they’re burnt out, and need more time before deciding what they want to take at university. Instead of packing for their first year, they are now booking their flights to go volunteering in Africa, or work on a yacht in the Caribbean.

North America is starting to catch on to the “gap year” trend, and for good reason. Amid concerns about drop-out rates, researchers now say that students who go straight to university often find themselves in a program that doesn’t interest them, and are more likely to change programs, thus prolonging their degree and increasing their debt level, and they are more likely to quit. Experts now say that going straight to university may be short-sighted for some, and a year out is the way to go for some soul-searching.

And taking a gap year has never been easier. Many universities are now willing to defer start dates for a year – York University is embracing this gap year phenomenon with its Bridging the Gap program and “celebrates” a student’s choice to take a year off to gain work experience, do community service or go on an international exchange and will reserve the student’s admission spot for up to a year provided he or she is accepted into the program. Harvard University, one of the top universities in the world, has always been ahead of its time and for the past 40 years has proposed that students take a year out in its letter of admission.

Is there a downside to taking a gap year? Not really, according to a 2008 Statistics Canada report published jointly with Canadian Policy Research Networks. The report found that students who delay post-secondary education don’t face a disadvantage in the labour market later on – as long as they actually complete their program once started. In fact, a Canadian Council of Learning study found that students who took a gap year were eight per cent more likely to be employed upon finishing all their studies.

Understandably, many parents are a little nervous that their son or daughter will be side-tracked and destined to remain degree-less forever. However, even though there are no formal studies on the actual number of gap year students who do make their way to university, admissions staff say that only a few drop off the radar.
On the contrary, one year out in the world can make a young person more focused, better prepared for university life and more likely to complete at least one university degree. After all, it’s not getting into university that counts – it’s getting the degree at the end of the line.

Students who have taken the year out, universities, and the latest statistics aften agree that the gap year was worthwhile. Although it may be a daunting prospect for parents and students to divert from the “safe” bound-for- university-after-high-school route, the rewards and benefits are well worth stepping out of the comfort zone. To find out more about gap year options, come and visit SWAP Working Holidays and Basecamp International Center Volunteer Programs at the Study and Go Abroad Fairs.
at 01:00 No comments:

The Four As of Awesome: A Change 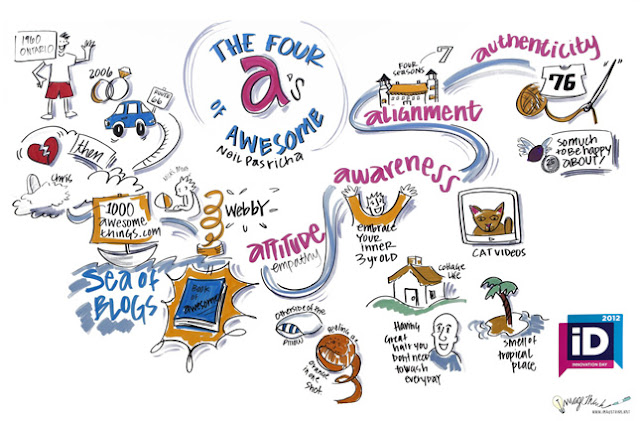 About a year ago, I had the pleasure of hearing Neil Pasricha speak at a conference.  I  had one burning question:  Why the word awesome?  Why not wonderful, fantastic, magical, whimsical etc.   I never did ask him the question; instead, I found this picture.

He feeds us a few more As and will provide the theme of the next four posts: attitude, awareness, alignment and authenticity.

A change in attitude reminded me of this video.  You might remember the Story of Stuff? Well, they have created another video called The Story of Change.