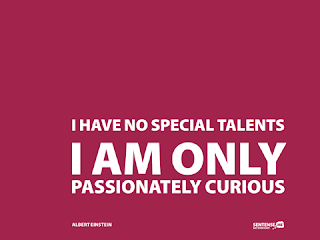 I read this quote this past week and it is stuck in my mind!   As spring comes, I am thinking about re-awakening my mind and body.  It is a time of renewal for many people.   We spring clean our houses, garages, maybe your body - but how about your mind?  How active has it been - or when is the last time you upgraded and re-awoken your mind.

Maybe we focus on this more in the fall when much of the population is heading to school.  As we spring into action this season, consider renewing yourself by trying something new and bringing yourself back to being passionately curious.

Got 21 minutes?   Take a time out, or eat breakfast over a TED talk.  Start your morning with a side of knowledge, along with your fiber and fruit.  Here are top talks about happiness.   A fitting topic for spring, no?

Have you tried a MOOC?  I tried my first this past winter.  It was a neat experience.  Cousera has a ton of topics offered - a new course starts practically each week!

Khan Academy is an organization on a mission. We're a not-for-profit with the goal of changing education for the better by providing a free world-class education for anyone anywhere.

Check out what is available to you at your local library.  I have taken origami classes, explored career planning and had the opportunity to meet some interesting people in my neighbourhood

6.  Pretend to be a tourist in your own city

Date your city.  Get to know more about it's history and the people that walked down Main Street many decades ago.

Want to pick up a new hobby or skill?  Maybe you don't have the cash flow? Try Swap City  or Trade School each of these organizations runs using a barter system.

Hobby drawers - or maybe in your junk drawer or down in the basement you have a box or bin of forgotten hobbies.  Did you take up cross stitch, or  maybe stamping?   Bring it back out and get back to something that was once important to you.   Grab a book from a library or try our next suggestion to get your creative juices flowing again!

You might have heard of this one a lot recently - Pinterest.  This site is a digital scrapbook that you share with friends and family.  You can pin images related to topics from fashion to food, and dyi or silly things like pictures of a dreamy guy; everything can be pinned.   Related to gap years - why not start pinning pictures of your dream travel spots?

10.  Open Culture - Open online sources are developing daily.   Have a peak here.    Loads of options are available as we move towards open cultures online.


Well - as you start to consider your plan for spring renewal in your home -think about spring cleaning your mind!   So, at the dinner table you can ask the time old question:  What did you learn today?
at 03:00 No comments:

I have had the unique pleasure of hearing this esteemed speaker and expert on leadership address several conferences and young leaders.   This is a new piece from him that seemed of interest to share.  Here is a piece he shares on forgiveness and leadership.

Drew Dudley, on forgiveness and Leadership:

I’ve learned a lot from the people I’ve lost.

When I was 19 years old, my parents let me host the last-day-of-school party (the one that’s been recreated in countless high school comedy movies) at our place on the lake.  I remember leaning against the cottage, snapping a photo of two of my friends as they snuggled watching the sun set, and lamenting out loud how I didn’t have someone special in my life.
My friend Scott, one of those musician/athletes with the perfect left brain/right brain balance, sat quietly next to me for a moment before saying, “Drew, for a guy who has a lot going for him, you spend a lot of time talking about the things that you don’t have.”


The Person You Are

Too young to recognize the value of a friend who tells you what you need to hear instead of what you want to hear, I shot back:

“You just think I have a lot going for me!  You don’t know what it’s like to have all this pressure!

To have everyone telling you how much they expect you to accomplish in your life!  You don’t know what it’s like to try to live up to what everyone wants!”

Scott looked at me for what seemed like an awfully long time.  Finally, he said quietly, “Drew, you don’t give your friends enough credit.  We don’t care about you because of the guy that you might become one day.  We care about you because of the person you are now.  You should try doing the same thing.”
A few weeks later, Scott was rear-ended while driving our friend Tim to work.  Both of them were killed instantly.

When I got a job at my university bar, a young man by the name of Jason Abraham worked with me on Tuesday nights. He was tremendously well-liked on campus, and I asked him once why so many people seemed to be drawn to him.

With a laugh he told me that, “I just try to avoid doing things that might cause me to have to say ‘I’m sorry’.  I’ve found the best way to do that is simple: every time you talk about someone, act as if they’re standing directly behind you.  Your life gets exponentially better.”

In late February of 2000, Jason was diagnosed with stomach cancer, and was gone less than a month later, a few days short of his 24th birthday.

Never diminish the person you are in the name of what you hope to become.  Speak of people in a way you’ll never be ashamed to have heard.  Two profoundly valuable lessons I learned from people who never got to become the people they were going to be.  The thirteen others that were taken too soon left me with equally important insights that shape me to this day.  I share their wisdom wherever I can, especially to remind young people to avoid a mistake I made: assuming their value to the world can only be delivered “one day” instead of today.


No Universal Measuring Unit for Pain

Recently, after a presentation where I shared some of these stories, a young woman approached me.
“Drew, I just wanted to tell you how much I enjoyed your presentation,” she said.  “And to let you know that I feel terrible for all of the pain you’ve gone through in your life.”
We began chatting for a few minutes, and she began to share some of her own powerful stories.  She was an international student studying in British Columbia, but before she had come to Canada, war in her home country had forced her family into a refugee camp, where she lost both her parents and her grandparents to illness.
Stunned, I asked her, “How can you say you feel terrible for the pain I’ve had in my life, when yours so obviously dwarfs mine?”

“Well,” she said, “I’ve discovered that there is no universal measuring unit for pain.  Hurt just hurts.  So why bother comparing it?”

“The more important lesson I’ve learned about pain,” she continued, “is that only hurt people hurt others.  So if I want to be the type of person who does not hurt others, I have to let go of the things that have hurt me.  I have to heal.”


Only hurt people hurt others.

As I sat on the plane home after that conversation, I realized the profound implication of accepting that fundamental truth: leaders must heal in order to lead.  We have to let go of the things that have hurt us to ensure that they don’t rise up and cause pain to someone else.  I realized that meant that leaders have to forgive.

The problem is that can be tremendously difficult, because the reason we allow so many conflicts to go unresolved is because we want to win.  We feel as if someone has wronged us in some way, and though the continuing conflict sucks value from our lives, we’re not willing to finally put it to rest, to forgive, until someone acknowledges that we were right.  That we rightly “won”.

The most inspiring leaders I know aren’t interested in winning—they’re interested in succeeding.  I think it’s crucial to remember that sometimes success is not possible if we insist on winning.

There is no weakness in forgiveness.  In fact, I think that leadership often begins only where forgiveness begins.

I’ve lost too many people in ways that I cannot control to not tell anyone who will listen that if you can save a relationship, business or personal, simply by saying “I’m sorry” or hearing “I’m sorry” (and the latter is often harder than the former), do it.  The fact is that most people reading this will have someone who is no longer in your life who you wish still was, and the only reason they’re not is you haven’t been able to say “I’m sorry”, or hear “I’m sorry”.

The difficulty for me? I’m not good at forgiveness.  As I sat on that plane flying home, realizing that I could never be the leader I wanted to be without letting go of some of the things that have hurt me, I was rocked by the fact that I simply couldn’t do it.  There were certain people I wasn’t yet ready to forgive; certain feelings I couldn’t yet let go; even though I knew I had to.  That remains true to this day.

I’ve shared this idea in a number of places and have often been told that’s the problem: forgiveness isn’t something we can just “do” sometimes.  Recognizing its importance is one thing, acting to make it a reality is another.

The fact is this article isn’t to tell you that you need to let go of everything that’s ever hurt you, and everyone who has ever wronged you, right this moment.  However, what I think we need to do is recognize just how powerfully important it is to do it as soon as possible.

How important it is to ask ourselves each day, “am I ready to forgive?  Am I ready to make myself and my life better?”

Questions are powerful in leadership.  Even in the times they don’t bring us answers, they remind us of the importance of seeking them.